Dr. Nicolelis publishes new book “THE RELATIVISTIC BRAIN: HOW IT WORKS AND WHY IT CANNOT BE SIMULATED BY A TURING MACHINE” 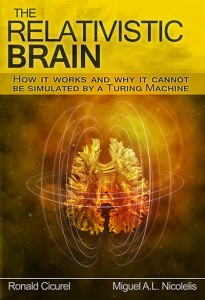 In this monograph, a mathematician and a neurobiologist join forces to address one of the most crucial and controversial scientific questions of our times: can the exquisite capacities of the human brain be simulated by any digital computer? By combining mathematical, computational, neurobiological and evolutionary arguments, Ronald Cicurel and Miguel Nicolelis refute the possibility that any Turing machine will ever succeed in such a simulation. As part of their argument, the authors propose a new theory for brain function: the Relativistic Brain Theory. This theory accounts for decades of neurophysiological and psychological findings and observations that until now have challenged the dominant dogma in neuroscience. Altogether, this monograph contains the inaugural manifesto of a movement intended to emphasize the uniqueness of human nature while discrediting pseudo-scientific predictions that the replacement of humans by machines is imminent. In the authors’ opinion, the misguided and misleading belief that digital machines can emulate all human behaviors defines one of the greatest threats that society faces in the future to preserve our way of life, our human culture and our freedom.