On June 12th 2014, the Walk Again Project (WAP), a non-profit international research consortium, performed a unique scientific demonstration, during the opening ceremony of the Soccer World Cup in Brazil. During that demo, a young Brazilian man paralyzed from his chest down, delivered the opening kickoff of the World Cup by using a brain-machine interface that allowed him to control the movements of a lower-limb robotic exoskeleton, while receiving tactile feedback from the exo’s feet.

Barely two years after its public demonstration, the Walk Again Project (WAP) is publishing its first clinical report, describing the findings obtained after the first year of training of the eight paraplegic patients, from January to December 2014. In this clinical study, the international team of neuroscientists, engineers, and neurorehabilitation personnel reports the discovery that the group of patients who have continued to train with  the brain-controlled system, including a motorized exoskeleton, have regained the ability to voluntarily move their leg muscles and to feel touch and pain in their paralyzed limbs — despite being originally diagnosed as having a clinically complete spinal cord injury, in some cases more than a decade earlier. The patients also regained important degrees of bladder and bowel control, and improved their cardiovascular function, which in one case resulted in a significant reduction in hypertension. As such, this is the first study to report that long-term BMI use may lead to significant recovery of neurological functions in patients suffering from severe spinal cord injuries.

The WAP researchers theorize that the long-term training regimen, which started in the early part of 2014, likely promoted brain reorganization and activated dormant nerves that may have survived the original spinal injury that occurred 3-14 years earlier.

The researchers, led by neuroscientist Miguel Nicolelis, director of the Duke University Center for Neuroengineering and principal investigator of the WAP, say that they do not yet know the limits of this clinical recovery since patients have continued to improve since the World Cup demo until today (a second manuscript will report on the continuous improvement from December 2014 to May 2016). However, they believe that the present discovery should change rehabilitation practices in paraplegic patients in the future by upgrading the status of brain-machine interfaces, from a simple assistive technology to a potential new therapy for spinal cord injury rehabilitation.

Nicolelis, who is also President of the Alberto Santos Dumont Association for Research Support, the non-profit Brazilian research society that coordinated the clinical study of the WAP, and other researchers from universities in the US and Europe published their findings in the August 11th issue of the journal Scientific Reports.

Movie 1 Sensory improvement over 12 months of training from Nicolelis Lab on Vimeo.

Movie 2 Motor improvement over 12 months of training from Nicolelis Lab on Vimeo.

Description – Videos illustrate the motor recovery reached by some of the patients. One video shows patient training in the brain-controlled exoskeleton. The two animations depict the extent of motor recovery in patients over the 12 month period. Credit to AASDAP and Lente Viva Filmes, São Paulo, Brazil. 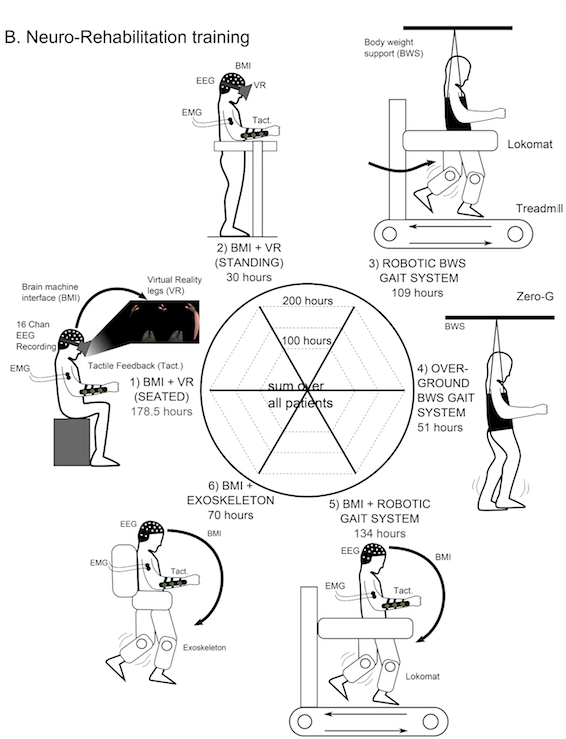 Figure 1 – Neuro-rehabilitation training paradigm and corresponding cumulated number of hours for all patients: 1) Brain controlled 3D avatar with tactile feedback when patient is seated on a wheelchair or 2) in an orthostatic position on a stand-in-table, 3) Gait training using a robotic body weight support (BWS) system on a treadmill (LokomatPro, Hocoma), 4) Gait training using an overground BWS system (ZeroG, Aretech). 5-6) Brain controlled robotic gait training integrated with the sensory support of the tactile feedback at gait devices (BWS system on a treadmill or the exoskeleton). (C) Material used for the clinical sensory assessment of dermatomes in the trunk and lower limbs: to evaluate pain sensitivity, examiner used a pin-prick in random positions of the body segments. Nylon monofilaments applying forces ranging between 300 to 0.2 grams on the skin, were used to evaluate patients’ sensitivity for crude to fine touch. Dry cotton and alcohol swabs were used to assess respectively warm and cold sensation. Vibration test was done using a diapason on patients’ legs bone surface. Deep pressure was assessed with an adapted plicometer in every dermatome.

Figure 2 – Patients with ASIA classification improvements: four patients changed ASIA classification over the course of the neuro-rehabilitation training, three moved from ASIA A to C and one moved from ASIA B to C. ASIA A is characterized by absence of both motor and sensory functions in the lowest sacral area, ASIA B by the presence of sensory functions below the neurological level of injury, including sacral segments S4-S5 and no motor function is preserved more than three levels below the motor level on either side of the body, ASIA C by the presence of voluntary anal sphincter contraction, or sacral sensory sparing with sparing of motor function more than three levels below the motor level, majority of key muscles have muscle grade less than 3.