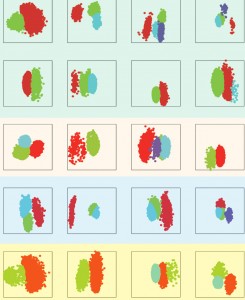 This manuscript describes a novel approach that integrates state-of-the-art microelectrode cubes that can record, for the first time in the literature, from volumes of cortical tissue, a large scale wireless transmission system for over-the-air transmission of these signals, and the hardware and software that integrates these recordings with behavioral data and new designs of BMIs. This work represents a fundamental advance in both basic neuroscience and brain-machine interfaces (BMIs) because of three key features. First, using this system we have simultaneously recorded the electrical activity of up to 1,874 single neurons, distributed across multiple cortical areas. This represents an order of magnitude increase in neuronal recording yield compared to previously published studies. Second, our wireless recordings, which can be scaled to more than 2,000 channels, have allowed us to conduct neurophysiological experiments in freely roaming monkeys, expressing a range of behaviors and BMI tasks that have never been explored before. Third, this integrated system defines a comprehensive prototype for a future fully implantable human cortical/subcortical neuroprosthesis…read more