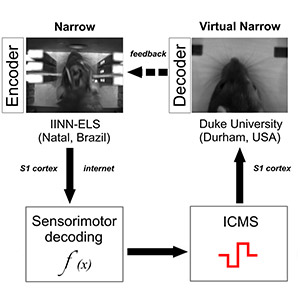 A brain-to-brain interface (BTBI) enabled a real-time transfer of behaviorally meaningful sensorimotor information between the brains of two rats. In this BTBI, an ‘‘encoder’’ rat performed sensorimotor tasks that required it to select from two choices of tactile or visual stimuli. While the encoder rat performed the task, samples of its cortical activity were transmitted to matching cortical areas of a ‘‘decoder’’ rat using intracortical microstimulation (ICMS). The decoder rat learned to make similar behavioral selections, guided solely by the information provided by the encoder rat’s brain. These results demonstrated that a complex system was formed by coupling the animals’ brains, suggesting that BTBIs can enable dyads or networks of animal’s brains to exchange, process, and store information and, hence, serve as the basis for studies of novel types of social interaction and for biological computing devices. Read the full article (PDF)

Movie S1 Legend
The movie sequence depicts a dyad of rats transferring cortical motor information via the brain-to-brain interface. The yellow circle indicates the correct choice in each behavioral chamber. The audio track is the spiking activity of an ensemble of M1 neurons. Immediately after the encoder’s reward, a pattern of ICMS is delivered to the decoder rat’s primary motor cortex. Note that, after the decoder makes a correct lever response, the encoder rat is rewarded for the second time during the course of a single trial.