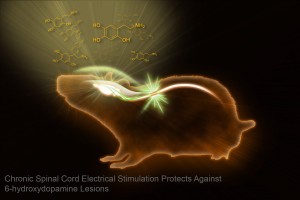 Researchers at Duke Medicine have shown that continuing spinal cord stimulation appears to produce improvements in symptoms of Parkinson’s disease, and may protect critical neurons from injury or deterioration. The study, performed in rats, is published online Jan. 23, 2014 in the journal Scientific Reports. It builds on earlier findings from the Duke team that stimulating the spinal cord with electrical signals temporarily eased symptoms of the neurological disorder in rodents.

The movie sequence shows a sham-lesioned control rat in the open field setup followed by a 6-OHDA lesioned rat with PD symptoms. Note the crouched posture and jerky, non-smooth locomotion observed in the 6-OHDA rat as compared to the control rat.