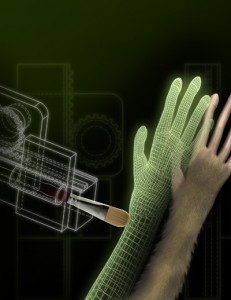 The brain representation of the body, called the body schema, is susceptible to plasticity. For instance, subjects experiencing a rubber hand illusion develop a sense of ownership of a mannequin hand when they view it being touched while tactile stimuli are simultaneously applied to their own hand. Here, the cortical basis of such an embodiment was investigated through concurrent recordings from primary somatosensory (i.e., S1) and motor (i.e., M1) cortical neuronal ensembles while two monkeys observed an avatar arm being touched by a virtual ball. Following a period when virtual touches occurred synchronously with physical brushes of the monkeys’ arms, neurons in S1 and M1 started to respond to virtual touches applied alone. Responses to virtual touch occurred 50 to 70 ms later than to physical touch, consistent with the involvement of polysynaptic pathways linking the visual cortex to S1 and M1. We propose that S1 and M1 contribute to the rubber hand illusion and that, by taking advantage of plasticity in these areas, patients may assimilate neuroprosthetic limbs as parts of their body schema.
Read the full article (PDF)