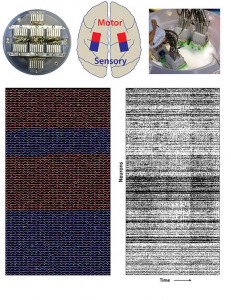 DURHAM, N.C. – A milestone in a neuroscience experiment was announced this week by researchers at the laboratory of Miguel Nicolelis, M.D., PhD, at the Duke University Center for Neuroengineering, with the recording of close to 2,000 brain cells at work in a primate.

By documenting the firing patterns of 1,874 neurons, the Duke team recorded its largest sample of brain electrical activity produced by populations of interconnected single neurons.

The finding advances the quest of the Nicolelis’ lab and its partners, which form the worldwide scientific consortium named the Walk Again Project™, to build a whole-body exoskeleton that could enable paralyzed people to regain motor and sensory abilities using brain activity to control the apparatus. The Walk Again Project™ aims to unveil the first version of this exoskeleton in the opening ceremony of the FIFA Soccer World Cup in June 2014.

“The accuracy of neuroprosthetic devices to help paralyzed people clearly improves with the number of simultaneously recorded brain neurons, so to get high performance from these devices for multiple degrees of freedom in movement, we need to record from thousands of neurons,” said Nicolelis, a professor of neurobiology at Duke Medicine.

“This is the first time that we have recorded more than a thousand neurons from volumes of cortical tissue,” Nicolelis said. “The cutting edge technology used to obtain these recordings, including our newly designed high-density wireless interface, opens a wide range of new opportunities for our neuroprosthetic work.”

Since publishing their pioneering studies on brain-machine interfaces in the late 1990s, Nicolelis and his colleagues have worked to record larger samples of cortical cells simultaneously to produce more naturally functioning neuroprosthetic devices.

“It is exciting for us to be able to sample from close to two thousand single neurons in just one recording session,” commented Mikhail Lebedev, senior research scientist in the Nicolelis laboratory. “In the not so distant past researchers were able to record from just one to two neurons at a time, and it would take them several years to collect the amount of neural data we are now recording in a single afternoon.”

The next step is to incorporate the brain-machine interface technology into a specially engineered exoskeleton created by researchers led by Dr. Gordon Cheng at the Munich Technical University.