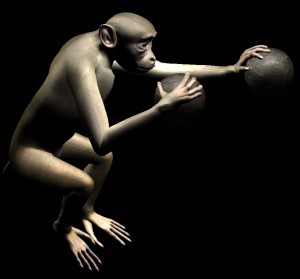 Large-scale brain activity from a rhesus monkey was decoded and used to simultaneously control reaching movements of both arms of a virtual monkey avatar towards spherical objects in virtual reality.

In a study led by the Nicolelis Lab, monkeys have learned to control the movement of both arms on an avatar using just their brain activity. The findings, published on Nov. 6, 2013, in the journal Science Translational Medicine, advance efforts to develop bilateral movement in brain-controlled prosthetic devices for severely paralyzed patients. To enable the monkeys to control two virtual arms, researchers recorded nearly 500 neurons from multiple areas in both cerebral hemispheres of the animals’ brains, the largest number of neurons recorded and reported to date. Read the full article (PDF)